The eight winners are as follows:

Jamie Long is the recipient of the Dan Morrison Memorial Educational Award of $1000.00 – daughter of John Long, Unit 18.

Natalie Rogers is the recipient of the Gerald Mosher Educational Award of $1000.00 – daughter of Norman Rogers, Unit 18.

The eight winners for the 2015 NS Highway Workers Education Awards are as follows:

My dad asked me to pass along a photo of the Dalhousie Student Pharmacy Society (DSPS) of the College of Pharmacy award I won this past week, which describes the award itself. 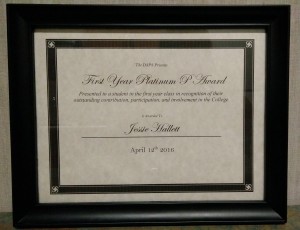 I’d also like to thank you and the rest of the CUPE 1867 for the bursary I received last year, as well as the one in 2013. It has been very helpful, and has allowed me to work fewer hours so that I can be more involved with non-class learning and social opportunities within the College. This year, I have been a student representative with the Dalhousie HOPES Clinic, which is currently connecting low income and marginalized members of the Halifax population with health information, and is working on opening a free health clinic once a week with care provided my students studying the health professions. I’ve also been volunteering at a local nursing home, involved with informing students about the changes in tuition, and participating in DSPS charity events such as skit night.  Thanks again!  Jessie